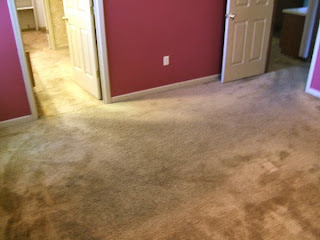 Wear patterns show up in carpets over time but how do you prevent them from happening sooner than later. Wear patterns typically occur at transitions from a hard surface to a carpeted area and traffic paths through a room.

People tend to drag their feet when they walk. This creates wear when going from a hard surface to a carpet because the carpet is typically higher than the hard surface. Also, we tend to go the same way through a room. The walking and the dragging of our feet create wear. This becomes very apparent in rooms with lots of activities

such as dens. Another factor that contributes to premature wear is dirt in your carpet. When we walk, the dirt grinds against the sides of the carpet fibers like sand paper and weakens the fibers. The result, at these high use areas, is that the carpet fibers get physically worn away and create a dull appearance. Also, because the fibers are frayed, they will absorb dirt, spills and such easier than the non-worn fibers.

The best ways to prolong the appearance of these wear patterns is first, VACUUM regularly. Removing the dry particulate dirt shown in the picture above is very important. Also, put doormats (non slip if on the hard surface) at the transition areas from a hard surface to the carpet. Let the doormat scrap the dirt off of shoes. It is cheaper to replace doormats than wall to wall carpets.
Posted by Walter Polk at 7:06 AM

Walter Polk
Grayson Smith Company has been cleaning carpets since 1970. We love to share our knowledge---Partner---Walter Polk